I am beyond proud to announce that the construction of the Siddhartha Primary School is complete! After months of making bricks in Takure and months of construction at the school in Bimire, all of our buildings are complete, painted, and now in use. This has been a tremendous effort by volunteers from all over the world and an extremely dedicated team of Nepali employees, and ten months after beginning our work, we are all so pleased to see the classrooms in use.

Construction work at the school began March 1st, and we had our completion party with the village on June 29th. Twelve weeks to complete six classrooms, an office, and three toilets seemed like a lofty goal, but we were able to hit our target and finish our work right before monsoon began. We worked seven days a week with teams of between 7 and 14 local employees, made up of a few consistent lead masons and several different teams of supporting labor. The school was designed by our architect and good friend Fred, of GroundUP Architecture, and I managed onsite operations with the tremendous help from YUWA Unity project manager Dheeraj Mishra.

I was really impressed by how easy our CSEBs are to build with, and the local masons seemed to really enjoy working with them. The grooved bricks allowed for us to use vertical rebar reinforcement at all corners and on either side of doors and windows, and our U-shaped blocks allowed us to make sill and lintel beams below the windows and at the tops of walls, respectively. The bricks take a lot of energy to make, care for, and move to the site, but the finished product is a beautiful, strong building, that provides a space for learning to some 70 children in the village of Bimire.

It was such a neat experience to see each of the bricks going into the walls, and knowing just how much hard physical labor went into making each and every brick. Local soil was harvested by hand, then sieved by hand, the batches were mixed by hand, and then each brick was individually compressed manually using our brick press. Once the bricks were made, they were all watered for a month as the cement cured, and then dried in the sun for a month before being used in construction. After the bricks were all dried out, we moved them by hand into stacks at a new storage location near where they were produced, and then loaded truckload after truckload full of the bricks to be moved down to the school. When the trucks arrived at the school, we lined up and handed the bricks down the line one by one, until we had towering stacks of bricks ready to be built with. We spent several days of manpower just moving bricks from our production site down to the school. It was a massive effort by everyone involved, and took a lot of energy, but there was something oddly satisfying about being a part of the daisy chain passing bricks. It was rewarding knowing that we moved 150,000kg by hand over the course of a month. It was even more rewarding to know that that weight was comprised of some 15,000 blocks that hundreds of people put so much energy into. It was a true labor of love and compassion.

Overall, everyone is proud of what we’ve accomplished in the last ten months, and we are eager to return in September to pick up where we left off. We are all spread across the globe right now while monsoon makes brick production impossible. Some are in the states doing fundraising, others traveling before returning, and myself and a handful of others (including three of our Nepali employees) will be heading to Auroville Earth Institute in India to study CSEB theory, production, and masonry from the makers of our brick press. We hope to return to Takure with more knowledge and tools so that we are better equipped to make a positive impact on the village we’ve grown to love.

Now that our first project is complete, we are excited to announce that our next project is the second primary school in the village, and we are currently raising funds for this initiative! We have already completed production of the bricks for the school, and are eager to begin construction after monsoon. For those in a position to contribute monetarily towards this amazing project, please consider making a donation on our fundraising page. If you need convincing, take a look at the incredible video made by one of our amazing volunteers, Jonathan of Subtledream Photography (with soundtrack by yours truly).

Anyways, I could write thousands and thousands of words about our work and how much it means to me, but I will save that for another post. For those interested in being a part of our work, please check out our newly-designed website.

Without further ado, I am pleased to present photos of the finished product. 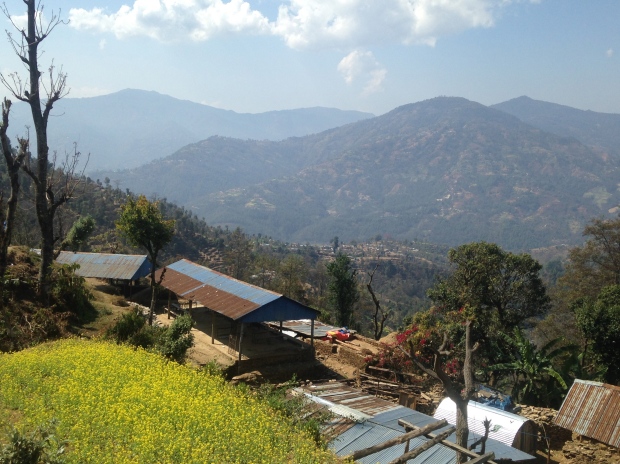 The view of the school on the walk down was my favorite part of most days. Such an awesome vantage point to track progress from.

Finished product. Taken on the morning of the completion party.

After demolition, preparing for the new foundations.

Three classrooms complete, with a bit of a view of the seating area.

Old toilets on the precarious edge

New seating area, hand washing station, and three toilets. Look at all the extra space that the retaining walls gave us!

Taken just before we started demolition. 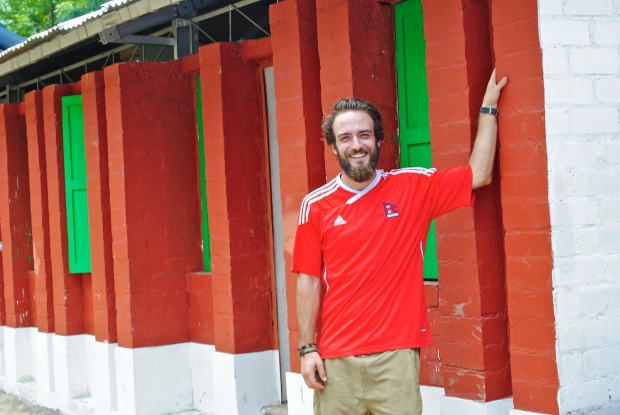 Our first project on site was to build a tool shed for all of our sacks of cement and equipment. 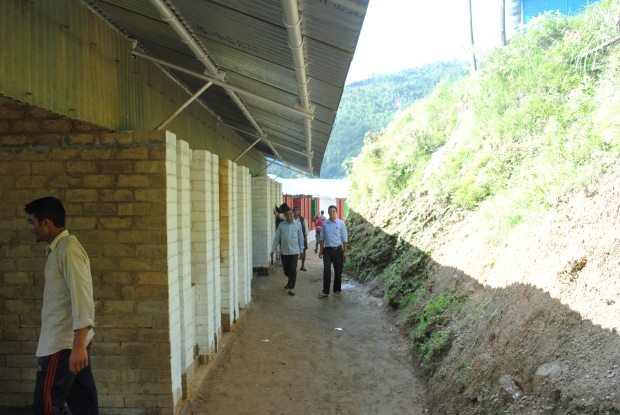 Teacher Ramesh and Headmaster Tej walking past their new office. (Yet to be painted at the time of this photo.)

The road to the school was impassable by truck that morning, so we had to carry our gabion cages down by hand. Thank goodness for eager volunteers!

We built 27 cubic meters of gabion retaining walls to fortify the hill that the school is built on. All of the stones used were from the walls of the old classrooms.

Beautiful details of Lord Ganesha on the doors of each classroom. 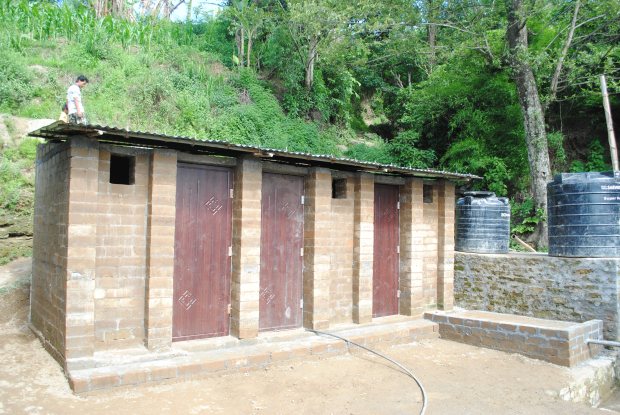 Three new toilets and a wonderful handwashing station. By building the retaining walls and extending the site, we opened up a whole area that was unused before.

Smiles all around! Our masons and one of the teachers at the school staying cool in the shade.

The teachers and children started using the classrooms before they were even halfway complete. All six classes shared two tiny rooms as their temporary learning center. They were eager to spread out and do separate lessons. 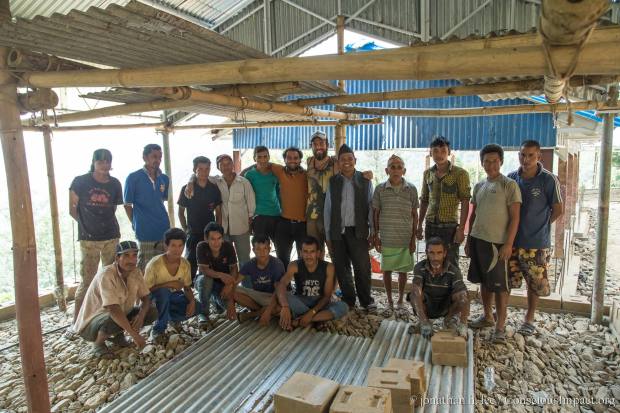 What an all-star team.

I will never forget the joy I felt working alongside parents of the school kids. Seeing their joy as the project neared completion was really moving for me, and a wonderful reminder of why I’m in Nepal.

One of the finished classrooms. It was temporarily used as the wood shop to cut the doors and windows to size. 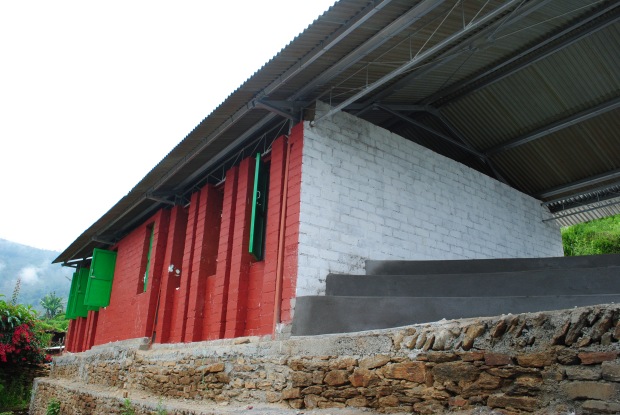 Part of the seating area and two classrooms that I designed. The existing steel was right on the edge of the site, so we did what we could to fortify the wall, and we kept our structure as far from the edge as possible. 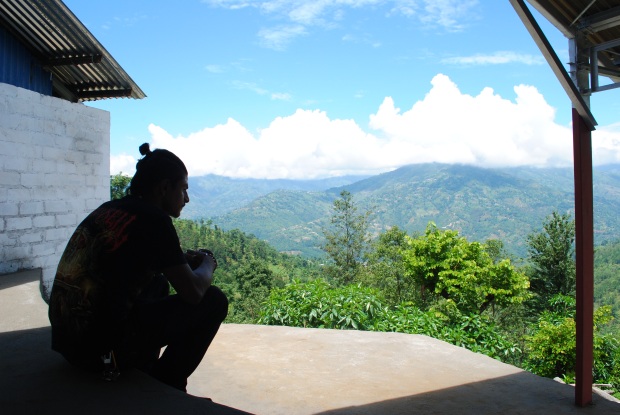 Rupak enjoying the view from the seating area. He is one of the backbones of our organization. Our work at the training center making bricks would be an uphill battle without his strength and leadership.

2 thoughts on “School Is In Session!”